Al-Arabi Club is one of the oldest clubs in Qatar and one of the two football pillars in Qatar. Noting that Al-Arabi is the second best team gained local titles. The foundation of Al-Arabi Club goes back to the merge of both Al-Wahda Club, founded on 1952, and Al-Tahrir Club founded on 1957. From this point on Al-Arabi Club started continuous successes towards victories and establishing wide fan base, which is considered the largest fan base in Qatar.

To become one of the advanced leading clubs on the national, regional and continental levels.

Among the things that Al-Arabi Club is proud of; is the wide fan base, which is considered the biggest in Qatar. Some even think that the popularity of Al-Arabi Club expands to GCC countries and maybe went further overseas after contracting with the Argentinean Superstar Gabriel Batistuta during the sports season 2003.

This club was located in east of Doha city (adjacent to the location of Ras Abu Abboud current bridge). This club was merged with Al-Wahda Club under the name of Al-Arabi Club, pursuant to the ministerial resolution number 11 for 1972 as well as the memorandum of Youth Organization in this regard.

The club was located in the south area in Barahat Al-Jufairi.

The foundation of Al-Wahda Club

The beginning was with Al-Hilal Sports Club during the 50s and due to different reasons and opinions, a group of players separated of Al-Hilal Club to establish Al-Kefah Team chaired by Mohammed Al-Ansari. The fate played its role when both teams Al-Hilal and Al-Kefah played friendly football game, which led both teams to merge under the name of  Al-Wahda Sports Club in 1957.

The new club logo was designed as two shaking hands, portraying the merge of both teams Al-Hilal and Al-Kefah. This was considered the first ever merge, as there was another merge for this club with Al-Tahrir Club on 1972 pursuant to the ministerial resolution number 11 under the name of Al-Arabi Sports Club. 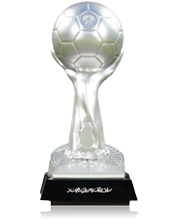